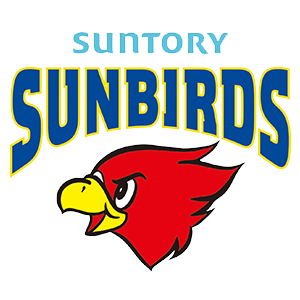 Team introduction
The Suntory Sunbirds are based in Minoh, Osaka Prefecture and were formed in 1973. In their successful history, they have won seven V.League championships, including five in a row from 2000 to 2004. They have also won the Emperor’s Cup and the Kurowashiki All Japan Tournament. A number of their players have been in the Olympics.

The team’s powerful offense keeps fans on the edge of their seats. Add to this the unique personality of each player and you have a mesmerizing experience both on the court and in the stands.

The team looks to win three crowns—V.League, Emperor’s Cup, and Kurowashiki.
And in doing so, we provide energy and excitement to volleyball fans.

◆ Super Sunbird
The Sunbird mascot was re-designed in 2011 to be a Super Sunbird, a leaner, meaner version with an expressive face.
Super Sunbird is calm and gentle, and loves shaking hands and interacting with people. But once the game starts, he’s the team’s most passionate supporter. In fact, he’s unstoppable!

◆ Moonbird
2019 saw the sudden appearance of Super Sunbird’s rival, Moonbird. At first glance, he looks like a carefree character—a practical joker and bad boy. But he’s actually very sociable and friendly.
His name shows that he’s a friendly rival to Super Sunbird. This odd couple truly needs each other.

Everybody is a key player! Watch and decide for yourself who’s your favorite!