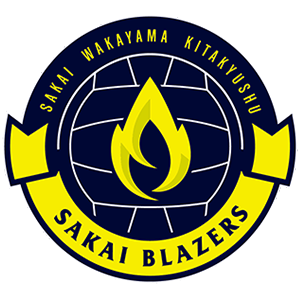 Team introduction
I belong to Volleyball V.LEAGUE Division 1 and am active mainly in Sakai City, Osaka Prefecture. It is a traditional team with a record of 17 times in the domestic league. Currently, there are four registered players from Japan.

With players chosen for the Japan national team last year, the Blazers have gained a following for their dependable veterans and quickly improving youngsters. They also pride themselves on the spirited unity of their fans.

Under this season’s slogan of “Blazers nation we are one!”, players and fans alike unite—as if they were a country—in pursuit of the title. All shoot for victory as “one nation.”

Masahiro Sekita is a setter who also plays for the Japan national team. His intelligent and accurate set-ups give his teammates the maximum attacking advantage. Hopes are high for him to lead the team to another title this year.