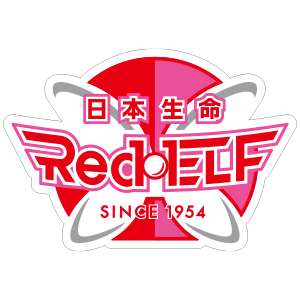 Team introduction
The Nippon Life Women's Table Tennis Club was founded in 1954. As Nissay (Nippon Seimei) Red Elf, it participates in the table tennis T.League, which launched in 2018, and was league champion that year and the next. One of the oldest corporate table tennis teams in Japan, Red Elf will continue to convey the thrill of this sport to fans.

Besides the spirited play of each member, Red Elf is characterized by its winning teamwork. This outstanding teamwork combines perfectly with the strong unity of the bench.

Under this season’s slogan of “Strength, enthusiasm, and beauty,” the team is shooting for a third consecutive championship.

Elfie is a little girl elf who loves table tennis. Although small, her intelligence and skill bring out the fighting spirit of the players. Together with Mozurin, a happiness-bearing shrike (the official bird of Osaka Prefecture), she flies strong and proud to urge Nissay Red Elf on to victory.

Sakura Mori
Sakura Mori had the most appearances and the most wins in the T.League last season. She carried the team to its second straight league championship and was named MVP for the second half of the season and the entire season.
Her naturally cheerful personality and strong play inspire and uplift her teammates.