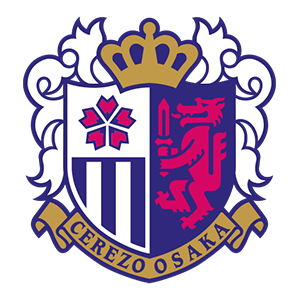 Team introduction
Formerly the Yanmar Diesel Soccer Club, Cerezo Osaka Joined the J.League in 1995. “Cerezo” is Spanish for “sakura” (cherry blossom), the official flower of Osaka city and a symbol of Japan. Cerezo is firmly rooted in Osaka but aims to be a club representing Japan as it blooms for all the world to see.

The club’s youth development system fosters players who look to the world stage and who strive to embody the club philosophy of “Sakura Spectacle” playing for Cerezo Osaka. The club’s culture is conducive to enabling players’ talents to bloom early on.

Under the wing of manager Miguel Ángel Lotina, who has a long and successful track record in Spain, the entire club will focus on growing stronger and becoming a winning team that is a perennial title contender.

The team’s mascots are two wolves, animals known for their intelligence, agility, and strong teamwork in hunting. Lobby is the soccer-playing son and Madame Lobina is his mother. They are passionate—and sometimes even fierce—supporters of Cerezo.

Jun Nishikawa
Jun Nishikawa is a promising striker who has continuously been a member of the Japanese national team, starting with the under-15 team. In his J.League rookie year, he has scored in league play thanks to his ability to dribble past opposing players and release a thunderous left-footed shot. Expectations are high for his inclusion on Japan’s team for the Tokyo Olympics.